February 14, 2018 another high school shooting in the USA. Another mass murder. 19 year old Nikolas Cruz uses an AR-15 assault rifle to kill 17 erstwhile schoolmates in a matter of  minutes. 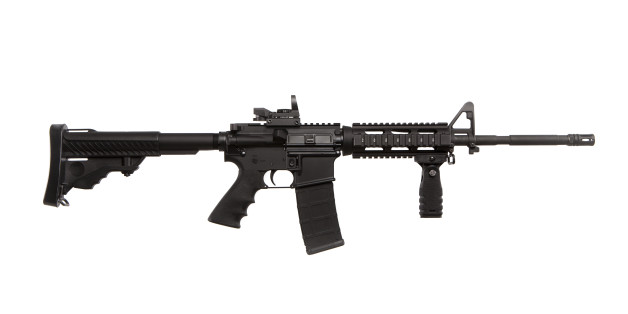 Image of the Colt AR-15, a semi-automatic variant of the US military M16 rifle

These killings occurred in very different countries. Perpetrated by different people with different motives. Yet these violent incidents are not isolated. They have occurred for decades and will recur because they derive from the same festering social structure. There is a strong relationship between the social structure a country engenders and the type and scale of the murders it experiences. This is what makes the USA and Nigeria similar- both societies propagate inequality and social intolerance.

In 2015, I gave a speech in my Oratory Class at the Yale School of Drama on Addressing a Militarized Police in the USA. A short summary can be found here .The feedback was interesting. One was actually memorable- ” Would you suggest that the USA sits back and allow murderous dictators like Gaddafi continue to kill innocent people!”. The young American man who said this was probably between 21-22 years old.Though young, his comment fully embodied the righteous Messiah complex of American society. This thinking has brought a lot of good to the world. But has done a lot of harm as well. Ask the Iraqis and Libyans. It also sadly details the rigid white vs. black approach to problem framing for many Americans. In Micheal Moore’s  acclaimed 2002 documentary- Bowling for Columbine,Canadians highlighted a major difference in how they approach conflict compared to Americans- “For Americans it is we go there, take out the bad guy and good returns to the world. For Canadians, it is we have a difference, how do we figure it out together?”. This explains a fundamental difference in worldview between these North American neighbors. One that has led to Canada being one of the safest places to live in and the USA one of the most dangerous. For someone who has lived in both countries, I know that this difference is true. As an outsider who grew up in dangerous Nigeria, I can observe similarities between the USA and Nigeria that accounts for why these countries are so violent. As a frequent traveler I have also observed similarities that account for why I can walk around without fear even late into the night in such very different countries as Canada, Japan and Norway.

Let us look at the data. According to the United Nations Office on Drugs and Crime (UNODC), the number of officially reported homicide deaths i.e. murders in these countries are as follows-

Of more interest is how this correlates overall with the regions in which these countries are located. Look at the table below from the UNODC for 2015 per region –

Why is Nigeria and the USA so high up in rates of murders vs. Canada,Japan and Norway?. Why is Africa and the Americas above the world average while Europe, Oceania and Asia are below?

What similarities exist between Nigeria and the USA? and between Canada, Japan and Norway?

1. Higher levels of inequality and emphasis on social segregation based on wealth

From the movie clip above, the history of the US derives from exploitation of weaker groups for the benefit of a few. To escape from the fear of retribution from the exploited, suburbia developed creating further segregation and marginalization of inner cities. I have been to some of these ghetto inner cities. They are predominantly occupied by African Americans, the houses are mostly dilapidated. The neighborhoods are filled with whores, crack dealers and gangbangers.

Nigeria is similar. The elite have mostly inherited their wealth on account of Jihadist wars and slave trading from the 1800’s. Most of these Nigerian elite families benefited from participating early in the westernization process and immediate post-independence political and corporate appointments. If you were to compare the names of the rich families in Nigeria today vs. the late 1800’s- at least among the leading ethnic groups i.e. the Fulani & Yoruba- they will be the same. There are also very high degrees of segregation. The elite live in the GRAs (government reserved areas) and the gated communities of the islands surrounded by dilapidated congested slums of their exploited poor.

You cannot make this up.  The Index Mundi’s Gini Coefficient amazingly shows the same correlation we saw with the number of murders. See the table below-

Interestingly enough, the regions in which both Nigeria and the USA are located i.e. Africa and the Americas also have higher than average Gini Index.  See the table below-

When a country institutionalizes inequality in the pursuit of a social hierarchy based on material wealth, it engenders high levels of violence

What is clear from the foregoing is that there is a strong relationship between the levels of inequality in a society and its murder rate. In Canada, Japan and Norway there is concerted effort across all levels of society to provide for the poor and the vulnerable. People actively avoid shaming others based on perceptions of social status. In fact you become an outcast if you attempt this. You cannot differentiate the neighborhoods of the rich from the poor. They are mostly similar in ambience and provision of public facilities. This leads to our first insight- ‘when a country institutionalizes inequality in the pursuit of a social hierarchy based on material wealth, it engenders high levels of violence’.

When a society has lower levels of social tolerance, it will often be more violent. Social tolerance requires making the effort to understand the other person’s views even if one does not agree with them. It is as Canadians put it- “how can we figure things out even if we disagree?”.  Often times, people who are religious tend to see life in black and white. Good and bad. God and the Devil. Higher levels of religiosity in a society correlate with lower social tolerance. People expect you to conform to what they believe their god expects. If you do not, you are dehumanized. You are bad. You are the devil. And devils deserve to be banished, to be murdered.

There is a strong correlation between the levels of religiosity, inequality and murders in a country

Look at the table below. Does it look familiar? Haha! I bet you have seen this before already. This leads to our second insight- ‘there is a strong correlation between the levels of religiosity, inequality and murders in a country’!

Rate of access to guns does not seem to correlate with the rate of murders. Look at Table below-

The USA by far has the largest number of guns and this correlates with its high levels of murders. Why it has so many guns per capita compared to rest of world is driven by its history and that it is a society that feeds on fear. The enemy is everyone else. This drives consumption including of guns.

Interestingly Norway like Canada has a high level of gun ownership but fewer than expected murders. This indicates that the level of access to guns does not correlate with higher murder rates. Norwegians and Canadians have so many guns but do not seem interested in killing one another. But why does the US with only 3x more guns per capita than Norway have 40x more murders?

Let us look at Nigeria and Japan. Both countries have low rates of gun ownership. Nigeria has 2x the guns per capita of Japan but 45x its murder rate! Even more interesting, Nigeria has only 5% of guns in Norway but experiences murders at a whopping 615x!

What is going on here?

A society with high inequality, lower social tolerance and higher access to guns will inevitably have higher levels of murder

It does not appear that more gun ownership leads to murders. Indeed guns do not kill. But why does Nigeria and the USA have higher murder rates than their relative gun ownership levels would suggest?

It goes back to the other factors and this leads to our third insight- ‘a society with high inequality, lower social tolerance and higher access to guns will inevitably have higher levels of murder’. People kill people especially when they are angry, jealous and hateful.

What is clear from the foregoing is that societies with high murder rates need to begin a long term process of social reform. They need to emphasize universal social welfare vs. a narrow focus on economic growth alone. They need to assure universal access to basic income, healthcare and housing. They need to reform their justice systems and assure that citizens of all social classes have the same level of access and fairness to public works and the justice system. Black Americans in Flint Michigan should not be left to die from lead contaminated water because they are too poor to have a voice. Poor Nigerians should not be left to scavenge for food in the garbage bins because it is only normal that only the strongest must survive.

In the short term a faster impact solution will focus on reducing the level of access to guns, performance boosting accessories such as bump stocks and endless rounds of ammunition. By taking weapons of mass destruction out of the hands of angry, jealous and hateful people, countries will reduce the scale of murders. Murders will still happen in the absence of social safety nets. However they will only occur at much lower mortality rates- saving more lives.