The World Bank estimates that, on current trends, sub-Saharan Africa will meet the MDGs in 2147 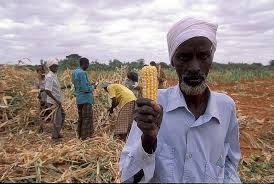 Africa is the only region in the world where poverty and hunger are on the increase. The number of undernourished Africans increased by one million a year from 2000 to 2002, though the proportion of people undernourished reduced from 36% to 33% over the previous ten years.

On current projections Africa will be the only continent that will fail to meet the international community’s targets to reduce poverty, hunger and disease – the Millennium Development Goals (MDGs) – by 2015. Indeed the World Bank estimates that, on current trends, sub-Saharan Africa will meet them in 2147, more than a century off target. While diverse factors such as civil conflict, corruption and adverse terms of trade contribute to Africa’s problems, it is recognised that more and better indigenous farm productivity.

Agriculture remains key to achieving the poverty targets of the MDGs in Africa. Nearly 80% of the population in sub-Saharan Africa live in rural areas and 70% of this rural population are dependent on food production through farming or livestock keeping for most of their livelihood. Small-scale farming provides most of the food produced in Africa, as well as employment for 60% of working people.

Agriculture constitutes the backbone of most African economies; is the largest contributor to GNI, the biggest source of foreign exchange, and the main generator of savings and tax revenues.

But Africa’s agriculture is in crisis and set to get worse. This is because agricultural productivity is dropping in sub-Saharan Africa. For example, per capita agricultural production fell by about 5% over the last 20 years while increasing by 40% in other developing countries. As the focus of development assistance shifts towards export-led growth and state support for agriculture is progressively withdrawn, the productivity of small farmers has declined due to:

Added to these are two further problems. HIV/AIDS is reducing life expectancy and the productive capacity of farming households – in the past two decades 7 million farmers and agricultural workers have died of AIDS in the most affected countries.

Climate change, in the form of increased extreme weather patterns, particularly more frequent and prolonged droughts, is expected to have a further detrimental effect on Africa’s agriculture.

Farmers in sub-Saharan Africa are struggling to adapt to these crises creating opportunities for the private sector to bring in unique solutions.

If poverty in Africa is to be reduced,  productivity of Africa’s agriculture must be increased substantially and made to work more effectively.

Research indicates that African farmers themselves call for:

The European Commisson’s (EC) sectoral support focuses on commodity crops, cultivated by better-off farmers, rather than staples. The privatisation of extension services, unless carefully designed to deliver at community level, can also prejudice resource-poor farmers since, for example, service provision to remoter areas is often not profitable.

Previously aid was used as a primary driver of food security in Africa. However it reached the poor usually in the form of food aid. This often has an adverse impact on local production systems and markets, and leads to longer-term dependency on aid.

The European Commission (EC) is Africa’s largest aid donor and recently via the EU-ACP Cotonou Agreement begun to acknowledge the need to integrate existing commercial and industrial enterprises into the world economy. Without a change in focus from aid to enterprise it is unlikely that food security can be achieved in Africa.

African governments are also proposing policy initiatives that involve improving access to land, mobilization of private resources, and introduction of sustainable production techniques to small scale farmers and integration of activities along the value chain. In a bid to reduce the loss of government’s aid, the Nigerian government recently launched agric inputs subsidy payments via the e-wallet and the setting up agric input retail centres in all LGAs in the federation. Focus has however been on improving the role of the private sector in Africa’s agriculture.

The foregoing indicates that reduced aid to Africa’s farmers and the government’s focus on increasing the private sector’s role creates opportunities for Africa’s entrepreneurs who are thus only limited by how far they intend to grow.