When we lose our ability to be self critical as a race, we lose the self awareness to effect the change we need. 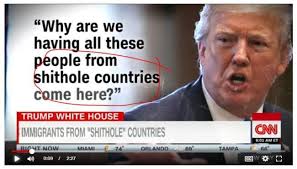 On Thursday, January 11, 2018 during a meeting on immigration reform, it was alleged that Donald Trump (President of the USA) referred to African, Central American and Caribbean countries as ‘shithole’ countries. There seems to be different interpretations of what was actually said. Taken in context, especially if true that he also inferred a preference for Norwegian immigrants, his statements would come across as very insensitive.But is Africa or most of it a ‘shithole’- yes or no?

Can Africans in the US whose communities and families gave everything to them to enable them study and immigrate to the West and who then decided to stay back look themselves in the face and answer no to this question? Can we with good conscience pretend to ourselves that all our young people who prostitute and enslave themselves through the Sahara and North Africa are not running out of the ‘shithole’ we escaped? What do we say to the ghosts of thousands of Africans killed over the last 60 years with no justice served, did they all die in vain in a ‘shithole’ that has only got worse?

The African millennial has grown up regaled by stories of how local African currencies were stronger than the US dollar at independence in the 1960s. Of how many of its baby boomers rejected US Ivy league college offers because their standard of education was considered inferior to local African universities. Then unlike now there was no point overstaying tourist visas because you made more money working in Africa than in the West. Our parents did not go through the humiliation we face today in Western consulates or have to fast/pray in religious houses like we do today when seeking visas to visit or study in the West. Travelling outside of Africa was not the achievement we wear as laurels today. How far we have fallen!

The African child born today is likely not to live past 55 years while his birthday mate in other parts of the world have a chance of living an additional 30 years after he is dead. Today, the African descendant who studies and works in the US has the better probability of earning more, achieving a more successful career and even becoming president of his African country than his cousin of equal talent who stayed back on the continent. Such tragic outcomes arising because of the misfortune of being sent to the wrong side of the birth roulette. We know and rest of the world knows that Africa is indeed a ‘shithole’. Trump has only in a matter of fact and very public way said to our face what most of the world says about us behind our backs. Rather than get mad at him, let us get angry enough to remake our continent.

Let us be brutally honest to ourselves- our shame is apparent to ourselves and to the rest of the world. We know and they know that Africa is indeed a ‘shithole’. Trump has only in a matter of fact and very public way said to our face what most of the world says about us behind our backs. Rather than get mad at him, let us get angry enough to remake our continent to a homeland fit enough for most of our people to want to stay back in. Travelling out of the continent should be for leisure not because we seek a better life. When we achieve this state, we will not be sensitive to condescending remarks. We will not even have the need to validate ourselves by showing skyscraper cities. Having Skyscraper cities is not enough proof against a country not being ‘shithole’. What is the point of skyscraper islands in cities that mostly house citizens in sprawling slums- where foreigners live better than locals who have to eke out hideous lives without the basic infrastructure that was widely available only 50 years ago?

We can only protest this alleged insult but we cannot counter with our own insult that the US is a ‘shithole’. And why not? Because Americans have built community and invested in their country. On the other hand our elite continue to connive with foreigners to loot and cart away communal wealth. And when someone has the nerve to refer to the resulting ‘shitholes’ we have created, we join our thieving leaders to bristle against the most powerful man in the world who wants to hold the truth to us. For all his weaknesses, Africans actually need a leader like Trump. A benevolent strongman who would do anything to protect and help the interests of the ordinary African.

I love Africa and I hope its young people will throw away ‘victimcy’ and embrace the reality of our foot-mat position in the world today. We are not bound by our disadvantaged inheritance (compared to other races) but we can only rise above it when we accept our history, embrace the shame of our collective historical underachievement and determine to come together to effect the tough choices to uplift our communities and win back our honor in the world. China spent 150 years to reverse its oppression, we too can once we accept the reality of our relative underdevelopment. There is no shame to be down, there is only shame when we choose to stay down by denying the facts that stare at us.

Let us accept our responsibility and make Africa great again!